Potato Milk Is Wholesome And Why You Must Try It Now! 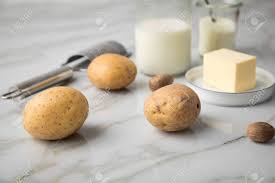 Potato milk is taking away the sensation of oat milk and almond milk. It’s ironic how potatoes can really do anything. Potato is like the I don’t know Tony Stark of the food world. Anyway, up until not so long ago, I used to think the potato is only for eating. But turns out you can drink it as well.

You know, at this point I am just waiting for some scientific research to say, Potato is actually like a tomato. You can call it fruit or vegetable. It’s all your choice. But whatever, that’s not what I am here to talk about. Where was I?

Oh yes, potato milk. So, let’s talk about potato milk. Given that potato milk is the easiest to find, why is it not as popular as almond milk? And I wonder how it tastes like.

You know what? After I finish writing I will look up ways to make potato milk. Because I am pretty sure I can’t find it where I live.

“FOOD THAT HELPS YOUR HEART“

Moving back to the benefits of potato milk. First of all, potato milk is gluten-free and vegan. So I guess we already have like 50 percent of the vote for potato milk.

On top of that, potato milk is very rich in minerals and vitamins. So, if you’re looking for vitamin alternatives for vitamin A, B12, C, B, K, and some more. Feel free to drink plenty of potato milk. Maybe potato milk tastes fabulous.

But it’s somewhat like soy milk. I love soy milk, but if you consume it just a tad more than necessary. Well, those who’ve drunk it know what’s bout to go down. Moving on, if you have any allergies, then you must know. Potato milk is gluten-free, dairy-free, fat-free, casein-free, soy-free, and cholesterol-free. Basically, potato milk is like cow milk but only better if not anything else.

Honestly, I was not thinking I will feel this way about potato milk. But right now, I wanna drink it for real. Yes, I told the same thing above. But currently, it’s not because I am curious. It’s also because potato milk is really healthy.

And fat-free which is literally perfect.

How Can I Drink It?

I found something, new guys! All this time I thought potato milk comes as liquid milk. But, it turns out, most of the potato milk is in form of a powder. If you have never consumed powdered milk, I suggest you do.

What you have to know about me is that I absolutely hate milk tea. But I am a sucker for coffee. However, I mostly only drink black coffee. So, when we have powered milk lying around. I inhale that milk like its vapor.

Out of the track again. You can drink potato milk as per your wish. Tea, coffee, cereal, add it to noodles. It’s all yours. You do you boo.

I guess I am off to search for potato milk. I’ll be damned if . What are you thinking of using the milk for?

Potato milk is actually a great substitute for an energy drink.