Which culture is better Western or Asian ? 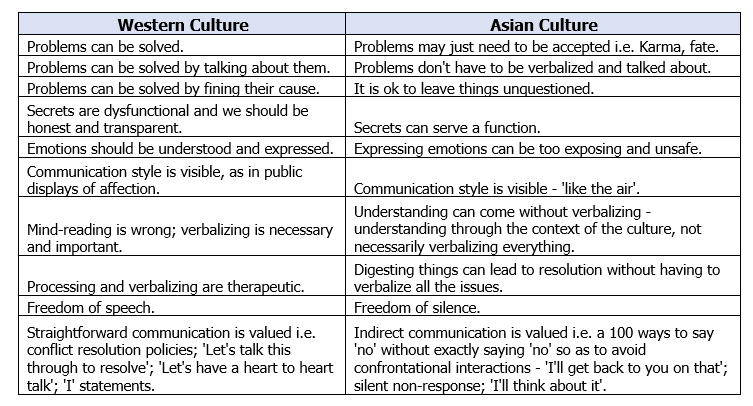 It is difficult to say which culture is better than other. But in terms of difference Asian and Western, both have a vast gap.

Asian culture is a lot different than western culture. Following culture in Asia will be harder, as a foreign student than Asians following western culture. So, if you’re planning to visit Asia or go to study somewhere in Asia, don’t be baffled by the cultural difference.

We have to be ready to accept the culture of country and have mind set to accept it before we visit the country. It is a really important thing to do. According to Richard Nisbett, the main cultural difference in countries come from thinking.

Likewise, Easterners focus more on the relationship between the environment and the objects. While Westerns tend to focus on the isolation of people in the environment and objects themselves. Likewise, the other way you can measure culture is by using the Individualism Collectivism dimension. Which shows the focus on individualism and collectivism.

Western culture focuses more on individualism than the East. As, western culture comes from ancient Greece that is refined and influenced by Protestant Reformation later on.  Asian culture has more festivals. Most of these festivals are celebrated collectively, By even inviting people you barely know are invited.

Not to mention that Asians highly believe in losing face. So, next time you visit any Asian country, make sure you don’t make a joke that might make one Asian lose his face in front of everyone.

Losing face normally happens when there’s some huge thing involved and when a person has done something really bad. But, many factors affect them as well. In western culture, it’s easier to make up with someone if you mistakenly offend them. Or maybe we just throw hands and then solve it like teenagers.

But, one mistake to the Asian culture and people, and maybe you will never see your friend again. Let alone think about throwing hands and making up.

One of the ways you can make someone lose face is if you disagree, calling out on a lie, deny, call out on a lack of ability, and not respecting elders properly.

If you find yourself in such a case, what should you do? The best way is to reply with words such as maybe, or yes, maybe. Likewise, you can use sentences like let’s talk about it later, and we will do our best.

As for teachers, Asians tend to be extremely thankful for them. Most Asian cultures ask students to regard teachers as their second parents. As an Asian myself, I grew up with the term that teachers are my second parents and school is my second home.

Why Culture Is More Important Than Religion.

Going to another place, let’s just say another city from where you’ve been living is hard enough. Just thinking about going to a place that keeps culture in high regard, higher than any mortal as high as gods gives me chills.

So, I hope your trip to Asia goes well. Just make sure to have proper research though. Because you know, “When in Rome, do as the Romans do.”

One Reply to “Which culture is better Western or Asian ?”